The 11th Day of Christmas. Mama Hollered.. IT Swallowed. 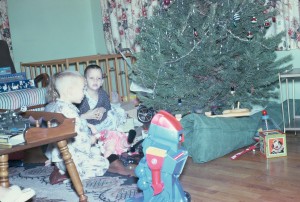 This is not exactly the photo I was looking for but you will get the idea. Same tree, different story.

Christmas at our house definately lacked. Mama sure did not have Martha Stewart skills when it came to decorating.  Our tree usually consisted of a scrawny little tree, tinsel, and those horrible silver icicles.  We put what decorations we had up on the top half and then after hanging those icicles for a few minutes you just grabbed a handful and threw them up in the air and wherever they landed that was where they were going to stay. The tree was only decorated half way up, naked from the middle down. Reason being, we usually started with the decorations past where the baby could reach. It seemed like there was a baby somewhere all the time.

Karen aka IT was the cutest little blonde baby with innocent puppy dog eyes. But don’t let her looks deceive you, under that beautiful little innocent face was a holy terror that would do just about anything while she was giving you that precious little “I am sweet as pie and would not do anything wrong” looks.  IT was playing in the floor near the tree when Mother went into another room to get something. She was only gone for a split second. She came back in and her eyes got as big as saucers. It was sitting in the floor and the only thing that could have happened is she found a Christmas ball that had fallen off the tree. It would have not surprised me one bit if IT had not shook the tree to make it fall off. One of those gold glass ones jawbreaker sizes in her mouth . Mama holler “Kaaaaaaaaaarrrrrrrrrrrrrrreeeeeeeeeeen, IT swallowed! Yes she sure did, she looked up at Mother with that innocent puppy dog look and GULP! Swallowed the gold glass ball whole.  Oh Lord what were we ever going to do. Now you have to realize unless you were at the point of death and Uncle Rufus could not annoint you with his healing oil and pray you back to life you did not go to the doctor. Mother grabbed her up and rammed her fingers in her throat. Nothing. IT was just as happy as a lark and full also. I don’t remember if Mother called Granny or not but IT did act like it bothered her one bit and Mother did not take her to the doctor.  Well the next time she messed her diaper Mother “sifted” through the deposit like she was a forensic scientist trying to find that needle in the haystack to convict someone. Nothing the first day. The next day diaper change time and we struck gold. Yep sure did. IT left us a present in perfect form. The ball intact and nothing broken. I think next year we had a tree minus the balls!  Each year when I see those glass balls in the stores I grin and think about when Mama hollered and IT swallowed!

This entry was posted in Christmas 2010. Bookmark the permalink.

Bad Behavior has blocked 1205 access attempts in the last 7 days.