Say hello to  Marion Frances, named after Aunt Marion Frances Fitzpatrick Studdard. She was my Mother and Aunt Janice’s sister. Aunt Marion died in February. Her son brought this doll to Aunt Jan to give to me. Seems like Aunt Marion always said if anything happened to her this was my doll that she had bought it when I was a  baby and named it Chris. She and Uncle Wilbur were unable to have children for a long time and she wanted a baby and she bought one!! I was the first grandchild in the family, first niece to the aunts and uncles and yes I do hear about it all the time that I was spoiled. I guess that is why I hate to have my picture made now. Back then I would walk in a room and it would be like the celebrity photograhers were there, flash bulbs going off on the Brownie camera’s!   I thank Aunt Marion for Marion Frances. I will treasure her always. Thank you Blake, I would have never known it was mine if you had not brought it.  I appreciate it. 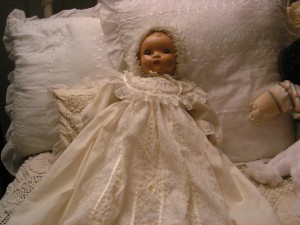 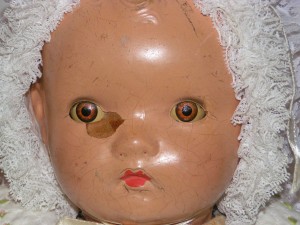 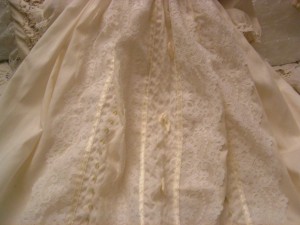 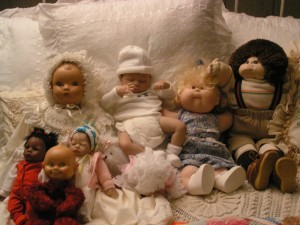 The doll on the right is an original Cabbage Patch Doll by Xavier Roberts, The red Kewpie Doll is in the front is one I received from Aunt Marion when I was a baby.  It only has one problem. It is missing the hat it had and Karen (It) bit the top of the point of its head off when she was a child. My other “children” Gary bought for me. 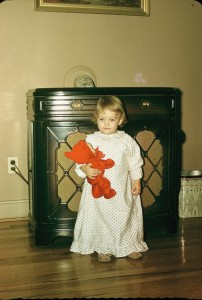 Chris and her Kewpie doll.. I still stay in a gown and I wish I had that heater in the background. We melted Hershey's bars on top of it and then ran popcorn through it.. We discovered chocolate popcorn.

Aunt Marion, Uncle Wilbur and her oldest son Terry during the 60's in Piedmont, AL at the Bicentennial Piedmont had!

Bad Behavior has blocked 1186 access attempts in the last 7 days.