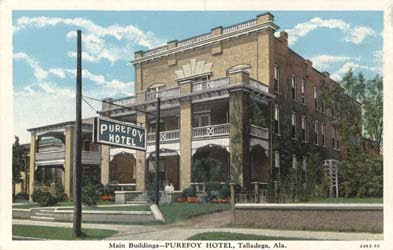 The Purefoy Hotel located in Talladega, AL was known for its true Southern food and hospitality.  Owner of the hotel Eva Brunson Purefoy.  I am fortunate enough to own a 1941 cookbook.

In the front cover of the book it list a menu of the Purefoy. It also shows a picture that was featured in Life Magazine of “Purefoy’s groaning board undergoes nightly attack of guest who will rise also groaning.” You could not see the tablecloth on the very long dining room table. It was covered with dishes of food. Miss Eva was going to make sure her guest were well fed. Word spread about the food and hospitality and people came for miles and even other states to eat at the Purefoy. The typical menu consisted of 40 entrees served buffet style.

The hotel originally began in 1916 in the little town of Monroeville, AL.  Almost everyone has heard of Truman Copote and Nell Harper Lee who wrote To Kill A Mockingbird. They were from Monroeville. The original hotel in Monroeville was so popular that they needed to expand but that was impossible so they began to look for a new location. Talladega, AL was chosen. May 17, 1920 was the beginning.

The dinners were so popular they even had to turn away guests. The cookbook I have says “No wonder, where could you dine on 30 different Southern dishes for $1.65 and $2.10 on the people who were not staying there.” It was said that one supper as we call it here in the South would put on at least 5 lbs on a guest.

The hotel in Talladega had 88 rooms. In order for them to serve three meals a day there had to be a staff of 27. One Easter alone 525 people sat down to eat probably the best meal of their life.

One of the foods that they were known for was the wonderful pecan pie.

Here is the recipe.

A Most Delicious Pecan Pie

Melt butter in an iron skillet until light brown, add sugar, add eggs, one at a time, beating seperately, add Karo, and pecans and pour on a unbaked crust and bake in moderate oven about 375 degrees about 30 to 35 minutes until brown and firm.

The hotel was torn down years ago. It is sad we now are missing these pieces of history.

This entry was posted in Cooking With Sadie, Main, Recipes, Travel Pictures. Bookmark the permalink.

9 Responses to Purefoy Hotel’s Famous Pecan Pie, The Hotel Was An Alabama Landmark.

Bad Behavior has blocked 426 access attempts in the last 7 days.